MVC Gaps
Back in the day, when MVC was originally described by Trygve Reenskaug as an architecture approach it was all about the users mental model, giving the user the sense of just working directly with the domain objects. Now dont confuse this with the dreaded CRUDy forms-over-data battleship grey enterprise app. Those apps force the user to manipulate the data directly; respecting, fighting and being forced into submission by the techniocal details of databases. MVC on the other hands puts that the model is the users mental model - the programmer, then has to deal with hiding the technicalities of persistence and such. As illustrated below the users works as if manipulating the domain objects directly. The view simply reflects the model state, the controller reacts to user actions, and translates them to model updates, and that's it.
This is fantastic for fairly simple apps. But as soon we introduce business rules with a certain amount of complexity, the direct manipulation metaphor does not suffice anymore. We need somewhere to put those business rules.  -The controller already has clear responsibility, so in keeping with single responsibility principle that's not the place for the behaviour. -The traditional OO answer is to put the behaviour into the model, but that leads to hard-to-follow logic jumping back and forth in the model objects, and (gark) up and down long inheritance chains. Moreover it turns out that a given domain object will play different roles over times. I.e. the object doesn't need just one behaviour, it needs several, and even worse it needs different behaviours over time. There goes SRP again, only this time in the "intelligent model".

The role a given object plays at a given moment depends on the context at that moment. So why not introduce contexts as something explict along with the explicit roles? Together roles implementing behaviour and contexts assigning roles to objects fill the gap in MVC.

Back to APS.NET MVC
Lets get practical: Where do the contexts and the roles go then? Since the contexts manage assigning roles and kicking off the behaviuour the contexts and roles fit well together. In the ASP.NET MVC + DCI demo I did for ANUG I organized the code like this: 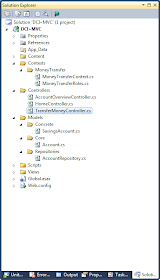 The Contexts folder has a subfolder for the use case I demoed. Other use cases would have their own subfolders. Inside the subfolder is the context for executing that use case, and the associated roles.

What is a role in C#? A role in C# is a set of extension methods on an interface (see this and that for more on roles in C#):

How does the context track the role assignments? Simple:

Where are the objects mapped to roles? Right in the seam between the controller and the context (lines 35 to 37):

Apart from lines 35 to 37 this is all just standard ASP.NET MVC stuff: Getting data in and out of the ViewData, and returning the view to render back to the user.

Summing Up
MVC is great for simple situations. It doesn't quite scale to complex business scenarios, but DCI does, and the two are a great match.
Leveraging the power of C# to do DCI and the niceness of ASP.NET MVC to go along with it, makes for a - IMHO -very compelling architecte style for an enterprisy web app.